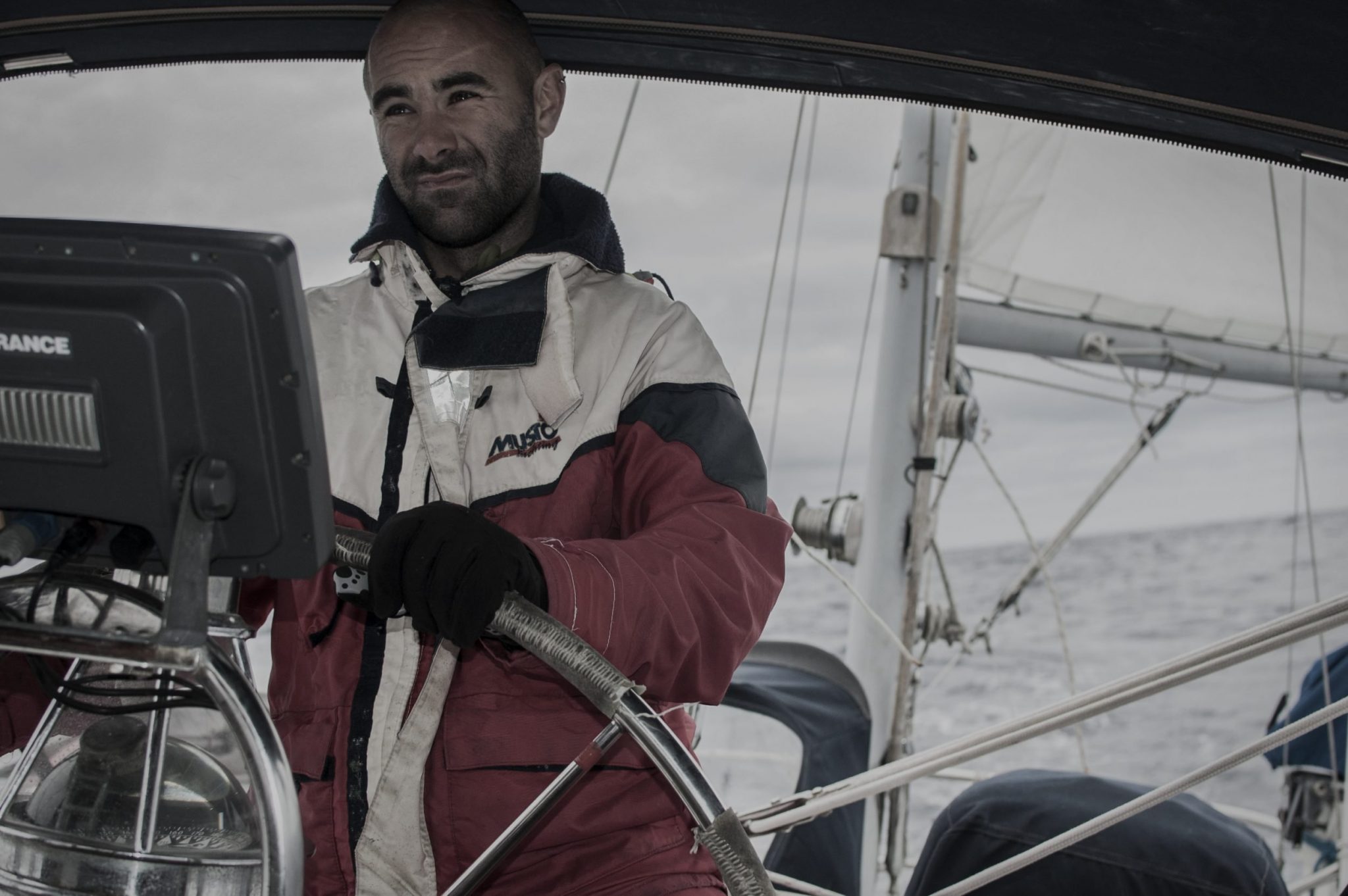 Posted at 15:50h in Blog by Leigh Timmis
Share 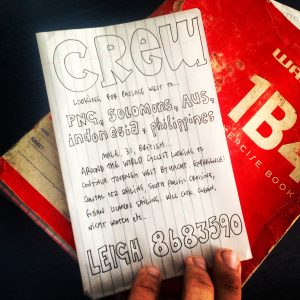 Stuck again. Like lures on the end of fishing lines, my scrawled notices for crewing positions flap in the wind, waiting for a bite, on the pin-boards of yacht clubs and marinas of Fiji. I sit beneath palm trees by the tiki bar of Vuda Point Marina, watching masts sway as the tide lethargically rises and falls and cruisers anti-foul their hulls in hues of red and blue. It’s 2014 and I ponder how a round the world cyclist ends up on a tropical island in the middle of the South Pacific…

It was the same four months before. Stuck. The road had been cycled to its end in New Zealand upon reaching Opua in the Bay of Islands. There, sheltering as cyclone season ravages the islands of the South Pacific, exists a community of cruisers, ocean sailors travelling the world, the oasis I had been hoping for. Told of a mystical septuagenarian sailing lady, famed throughout this sailing circle, I set out on a mission, walking the late autumnal docks to find a yacht on which to crew. Her name was Evi; it didn’t take long to track down the legend.

Deep in the dark saloon of a beautiful 1920′s schooner called Nina, amidst wrenches, sockets and marine components, wearing thin whips of facial hair and breasts to her knees, she challenged me with a firing range of conversation. Beside her sat Kyle, a young man with an effeminate nature and a contagious smile, enthused by the adventure of travel, his eyes and mind open and sparkling. The outboard motor screamed its two-stroke breath as we planed through low mist in a small dinghy to a 40-foot yacht called Wonderland. Aboard Wonderland, the ocean home of Evi, the three of us welcomed in the winter to the music of Edith Piaf and John Prine, waking in our sleeping bags to clouds of morning breath in crisp air, condensation running down the walls and the smell of fresh coffee. Our friendships grew, and as I began learning the ropes I was invited to sail with them to Fiji at the beginning of June. Our crew was looked upon as the line up for a reality TV program, “What would happen if you put a lady in her seventies, a gay man and an around the world cyclist together on a yacht in the South Pacific?”, the grey bearded nautical population asked. But before our first episode started filming there was a delivery to Australia to be made.

The engine refit on Nina was taking much longer than expected and with every day, frustration built in the crew. New fittings were delayed and with every piece of wood hacked from the hull came another profanity from the captain. Kyle and I renamed the marina ‘Hotel Opua’, in homage to the Eagles song Hotel California; “You can check out any time you like, but you can never leave”. To escape, we drank scrumpy from the bottle and wine from the box, we discussed the books of Henry David Thoreau, poetry of Walt Whitman, Tao and Zen philosophy and the struggles and social expectations that had affected both of our lives.

Eventually, one afternoon, I watched from the shore as Nina’s elegant lines swept gracefully out of the boatyard and through the bay. All eyes followed her, a flagship of the New York Yacht Club and an icon for all that is the romance of sailing. On the 29th of May she cleared New Zealand immigration, Evi, Kyle and five other friends waved from the deck as they embarked on the two-week voyage across the Tasman Sea to Australia.

On the 27th I had declined their request to join them on the delivery voyage, as I couldn’t afford the return flight. I bid them farewell and returned to Wonderland to await their return. In the galley a message in a bottle of scrumpy read “Leigh – Welcome Home! Take your pants off, strut around and remember that nothing is missing – KBJ.” 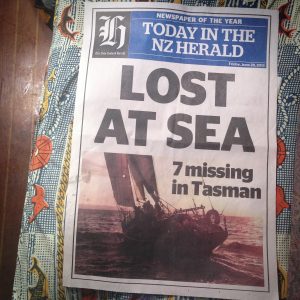 The tragedy made international headlines

Two weeks of winter days pass slowly when alone on a cold Wonderland. The day of my friends’ return flight came and went. My emails and messages sat without response. A buzz of concern began to rise amongst the community and as Chinese whispers of news and gossip blew from mast to mast a bigger story began to unfurl. Communications with Nina had been lost long ago. On the fourth of June their last message was received by a weather forecaster in New Zealand asking how to escape the storm fronts that were bombarding the boat, their storm sails were torn, they were on bare poles in high seas and gale force winds. Weather updates were being sent but there was no reply. The New Zealand Search and Rescue Service launched an extensive aerial search of the Tasman, the VHF radio sang emergency calls to them at intervals throughout the day, yet neither wreckage nor life raft were returned. Pictures of the crew, my seven friends, were pasted across international headlines “Lost at Sea”. I was still waiting on their boat, waiting for their return.

dark monsters in white veils loom out of the shadowy ocean

I’m with my friends in the dark saloon of Nina as she rolls aggressively in rough seas, books fall from bunks, food flies through the galley, dark monsters in white veils loom out of the shadowy ocean, rigging clank, clank, clanks eerily, sails flap violently, the creaking of wood under pressure tears ear drums. Some struggle to sleep, others hold onto anything keep from falling over. Discomfort in disorientation. Cracks open in the hull through which blinding shafts of light cut the heavy darkness and mahogany bleeds salt water. A shout from the forward cabin. A turbulent, raging surge of water rushes in, swirling through the hull. Suddenly the boat is split and I’m floating above, looking down over familiar heads bobbing in a vast angry dark ocean, zooming out, wondering what happened, why there is no life raft, what happened? Looking down, the finger nails I’ve chewed and spat into the water of Opua marina slowly sink out of sight in murky waters and I return from the daydream. I was supposed to be on that boat. The looping thought that runs through my head; I was supposed to be on that boat. 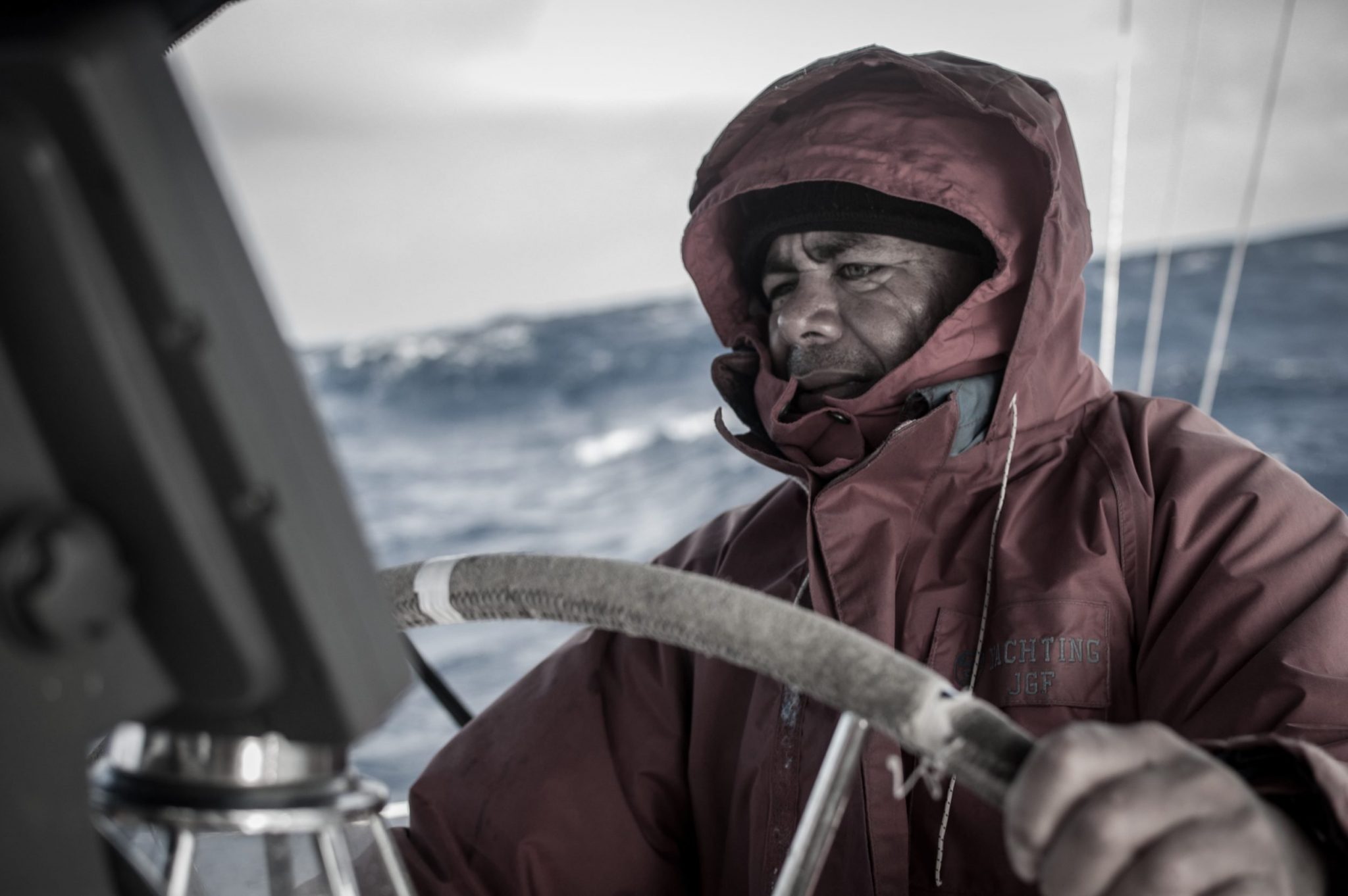 A Journey into the Unknown

By the middle of July, Opua and the few who remain there disappear into the distance as I look back from the deck of Seahawk, a 53-foot yacht on her way to Fiji. Leaving the coastal waters of New Zealand, my mind is divided between the draw of oceanic adventure and the memories of the preceding month. My first ocean crossing couldn’t begin in the wake of a more unsettling event. From my pocket, I pull a copy of Walt Whitman’s “Me Imperturbe” scrawled in Kyle’s handwriting on the back of a photocopied tourist map of Auckland. I breathe in the ocean air and accept the emotions that flicker through the mind, I fold them and put them in my pocket with the poem as land slips below the horizon. Below deck the VHF announces the closure of emergency radio transmissions to Nina and with it the closure of another chapter in my journey.

The ocean is a massive desert. To cross it all lifelines and connections with the land must be severed, you take your life in your own hands. Landscapes change like marine counties, reflections of the sky and reflections of the inner self. Rolling dark blue hills under clear blue skies, slick silver mercury ribbons beneath dense clouds, rich purple in the reflection of approaching squalls and mountainous confused waves below low-pressure systems. The night becomes just a dark part of the same day, life doesn’t stop, the night shift is exchanged and the journey continues onward. A large watery sphere continues to spin through the crisp clear space above. Days merge. Did I sleep?

The questioning of the self; at sea, the deck of cards we call normal life gets shuffled, normality is obscured and replaced with abstract. I awake, untie my lee cloth, stumble into the galley to make breakfast, clamber up the companionway to sit, heeled over, in the cockpit. I eat Weetabix five hundred miles from land and don’t blink an eyelid as to how existing in a 53-foot box powered by giant sheets of fabric attached to an aluminium mast has become normal life. A 53-foot island in motion with two palm trees and a population of three. In the ocean you feel your size, you feel the fragility of human life. The connection to nature is seldom so strongly felt as at the helm of a small yacht among the enormity of the waves. The croupier deals your cards and you play your hand. At the helm, you make love with nature, you also fight a wild drunken gypsy; Mother Nature is bi-polar. 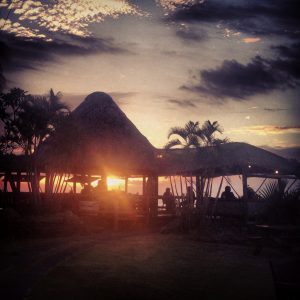 After eight days at sea, the shadowy silhouette of volcanic landscapes once again loom in the distance. For all the experience of fragility and conversations with death, there is nothing to make one feel more alive than to arrive in a new country by sea. Where the sea air bites and spits, the air of the land soothes and caresses. After the ocean, Suva, the capital of Fiji, is an invasion on the senses. Old busses full of shouting children rattle along potholed streets, spilling Indian music and kicking dust into humid air. Markets bustle with the colour of fresh papaya, aubergine, banana, tomato and cucumber. Indian milk sweets and sugar cane perfume the air. Fading hand painted shop signage of smoldering narrow streets reside opposite modern air-conditioned shopping malls with LCD adverts and thumping bass pumping through new fashions. Fiji is alive and I absorb myself into it.

The poem in Kyle’s handwriting seems more poignant than ever…

Me Imperturbe
Me Imperturbe, standing at ease in Nature,
Master of all or mistress of all, aplomb in the midst of irrational things,
Imbued as they, passive, receptive, silent as they,
Finding my occupation, poverty, notoriety, foibles, crimes, less important than I thought,
Me toward the Mexican Sea, or in the Mannahatta, or the Tennessee or far North or inland,
A river man, or a man of the woods or of any farm life of these states or of the coast, or the lakes of Kanada,
Me wherever my life is lived, O to be self-balanced for contingencies,
To confront nights, storms, hunger, ridicule, accidents, rebuffs as the trees and animals do.
– Walt Whitman