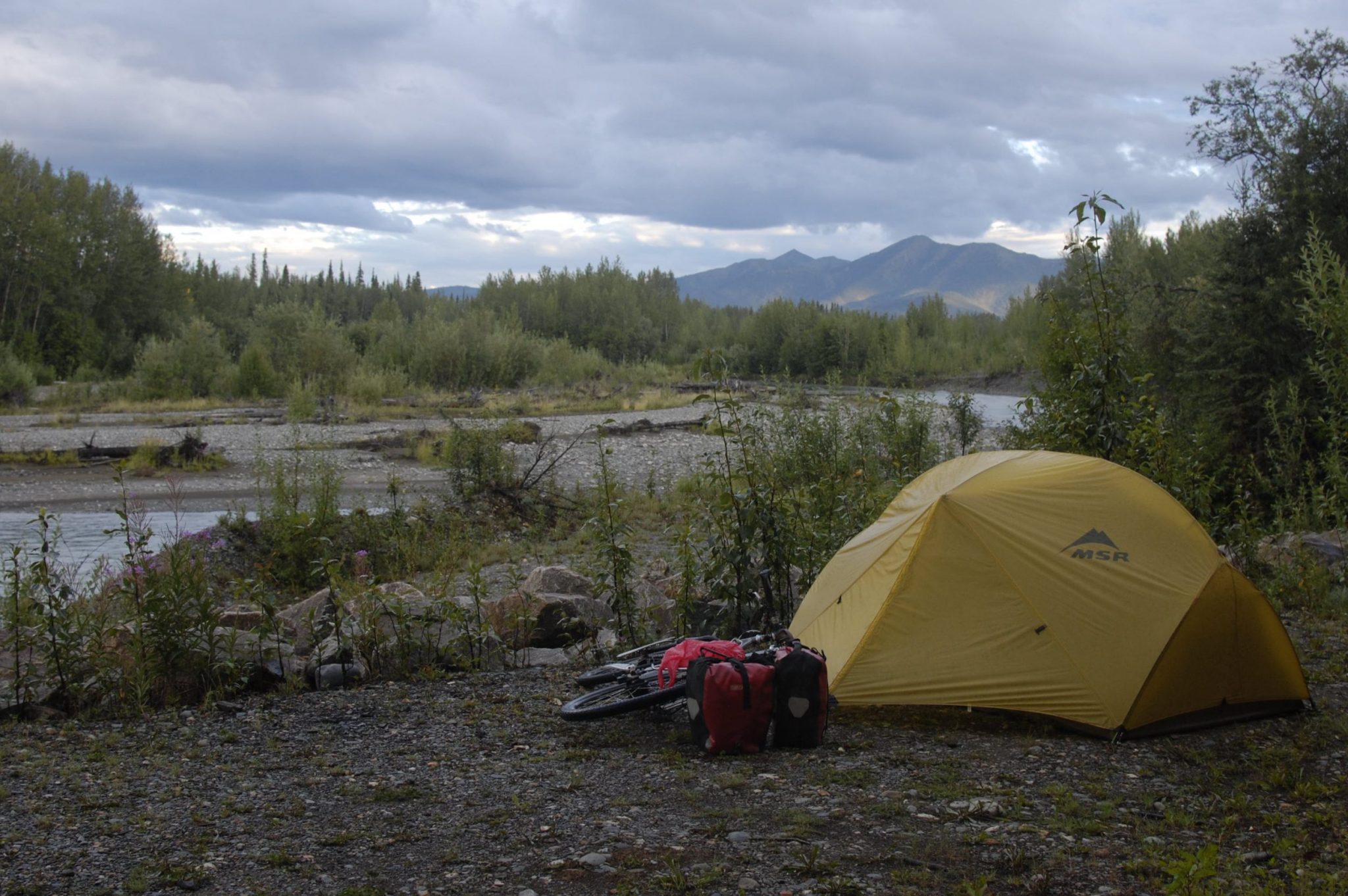 Survival in The Wilderness

24 Jul Survival in The Wilderness

Posted at 23:19h in Blog by Leigh Timmis
Share

I have encountered much wilderness in the world but never more so than in the vast empty expanses of Alaska and Canada; sparsely populated by people, the landscape alive with the creatures of horror stories. 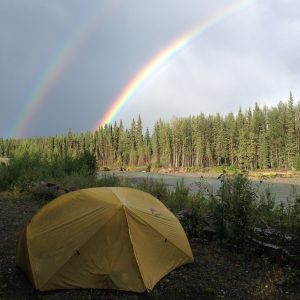 Putting the “Wild” in Wild Camping

Vivid rainbows cut colourful swathes across a heavy sky. I fill my stove bottle with petrol and pack minimal overpriced rations into a pannier in front of the old road house, simultaneously swiping the air and slapping exposed skin in a rabid dance. Insects bite furiously in the fifteen minutes before rain. A few kilometres out of town, a bridge on the Alaska Highway passes over Beaver Creek, a clear river running over boulders, banks littered with huge tree trunks washed downstream when this docile summer current turns fierce in spring. The empty far north reaches of Alaska and the Yukon Territory have taught me about the “wild” in “wild camping”. I check the river for the rich red run of Sockeye Salmon, they’re absent, which hopefully means the bears are too, so I set up my tent on a flat area of the river bank just before the rain starts. Out here we are far from the top of the food chain.

like chumming the water for a shark dive but without the cage, a bear can smell food from 18 miles away

I cook in the drizzle, far from the tent, keeping food smells away from where I sleep and as the rain builds, I throw a rope up and tie my heavy food bag high in a tree. The “bear hang” is intended to keep any bears away from the tent and give me time to get away from any carnivorous would-be thieves. The tree should be about a hundred metres from the tent, but I’m tired and wet and there’s a convenient tree five metres away so that will do. In bear country, anxiety plagues me until the food is away, it’s like chumming the water for a shark dive but without the cage, a bear can smell food from 18 miles away. In the tent, a false sense of security descends, rain beats the flysheet as a breeze blows through the trees. Warm and dry and protected from the outside world, sitting in my sleeping bag, I calmly write about the day’s events. Sticks crack beneath my food outside, I record the encounter in my diary.

26th July 2015: “I sit in the tent and see something moving under my food. I stay still. It comes back. I thought it was a fox but it looks wrong, the tail isn’t bushy and it’s too sleek. It has a cat-like face and a muscular body like a lion, big feet. But about the size of a big dog. It is unsure of me, I’m sure it saw me through the mosquito net. It crouches down in the low plants and sparse grass on gravel to hide, occasionally popping up to take a look. A beautiful animal. Just darker than the blonde of a lion, slightly coffee colour, maybe caramel. I wonder if it is something Jim told me about, an animal called a Martin. Have to research. Definitely feel more wild in the Yukon than Alaska. Raised wildlife concerns.”

My concerns were justified. 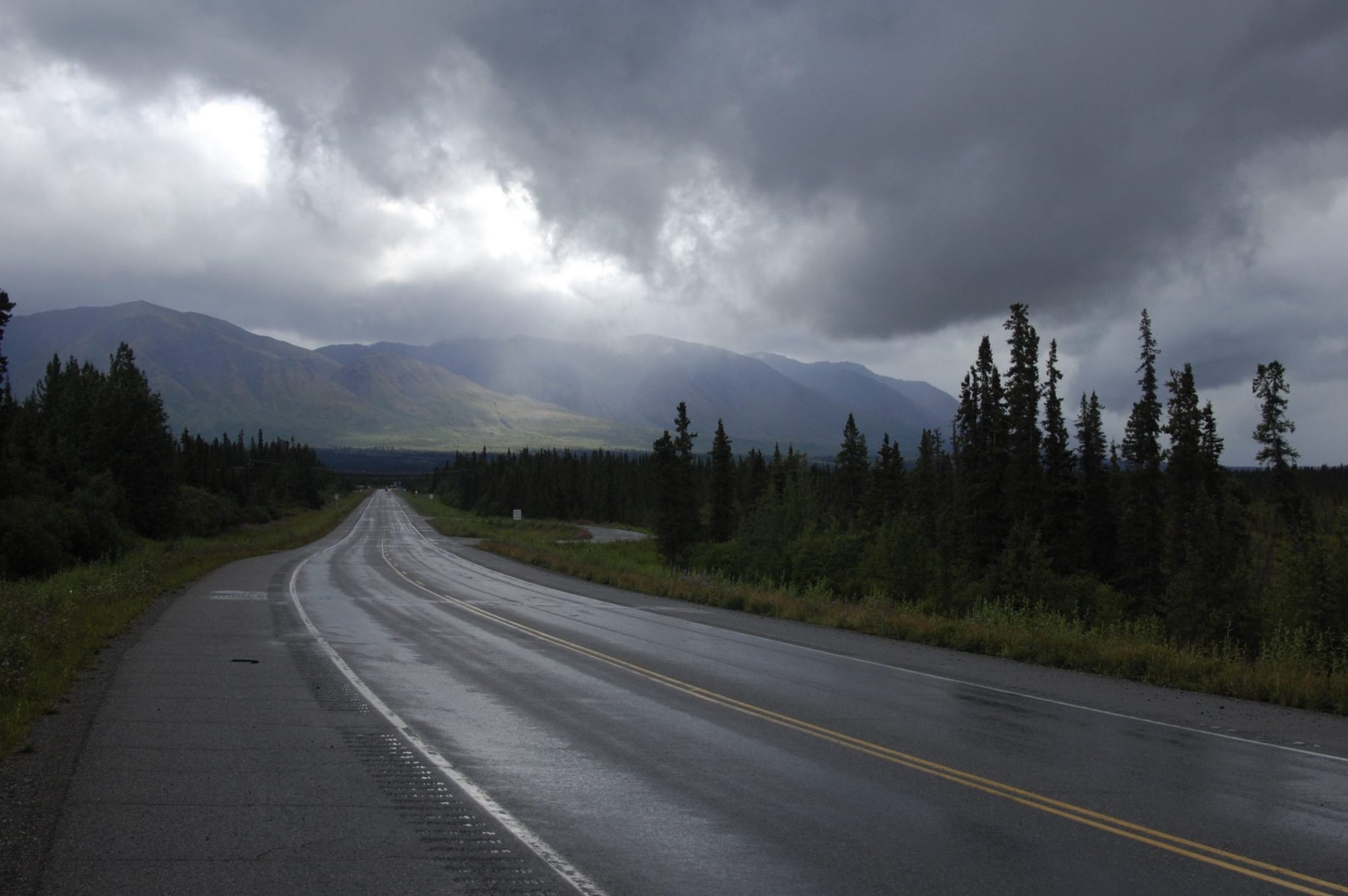 Two metres before a collision, one bear darts away while another jumps behind a tree for a stare-off

Few travellers on the road in Alaska had seen bears, myself included; the imagery of moose in the middle of the road began and ended my list of iconic creatures spotted. In Yukon Territory, the stories begin to change, as accounts of how many black bears drivers have seen each day or descriptions of the giant grizzly I should expect to encounter on the road ahead of me. Questions are asked of me, as to what a cyclist does in the road with a bear? I don’t know the answer. Questions about the deterrents or weapons I carry; my simple answer is “a big stick”. It seems I am the only person on the road without pepper spray.

Where previously, wild camping had always meant hiding from the eyes of interested strangers, now it is about finding a place where I can run for help if needed. Still, cycling continues free of animal intervention until Watson Lake.

No pepper spray, no guns, no sticks, just singing

Another enormous restock of food before a long stretch down the Cassiar Highway, the strip mall of Watson Lake filled my empty bags with heavy provisions before doubling back to a bridge where I’d seen a disused camp site. I pedal the dead weight of an over loaded touring bike down the gravel entrance path and accelerate around a corner. Perfect camping! The concrete platform where the office used to stand, nature reclaiming the flat sites which once accommodated RV’s, pylons missing their power lines. Following the inviting sound of rushing water, the worn trail leads me, meandering between overgrown bushes towards… BEARS! Gravel. Skid. Freeze. Two metres before a collision, one bear darts away while another jumps behind a tree for a stare-off. I stand motionless. It’s strange, the things that go through the mind in a bear stand-off, and what came is this… On arrival in Anchorage, a friend from university invited me to stay with him and his family for a week. His four-year-old daughter had a book about bears, which contained a poem to recite to bears if you should encounter them. And so alone, slowly edging my way backwards away from a bear, five metres away at most, in a child’s voice I sing “Hey bear, ho bear, I’m just coming through. Hey bear, ho bear, what ya gonna do…” and it works!

No pepper spray, no guns, no sticks, just singing. I back away and the bear stays behind it’s tree. I escape. 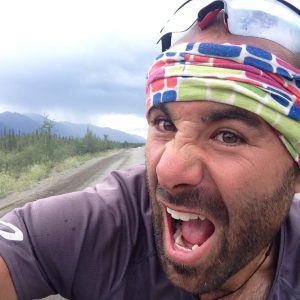 Faced with the wild, the wild face

Realising the Magnitude of Danger

Bright blue glaciers top mountains, which tower above giant red barns of North American agriculture. In Kitwanga, at the intersection where the Cassiar meets National Highway 16, a free campsite accommodates me and a few RV travellers. Around a camp fire in the evening, with beers, as sunlight flashes between a canopy of leaves, I describe the animal I had seen on the 26th of July. The older Canadian travellers use their iPad to show me a picture of a Bobcat, thinking that is what it could be, but the fur and ears are wrong. “Well there’s one other thing it could possibly be, but you would be very lucky to be so close to it,” they explain as they show me a picture of exactly what I saw on my first night in Canada. I was metres away from a Mountain Lion. It suddenly dawns upon me quite how lucky I’ve been.

To wake every morning in the wilderness of the north is a blessing, “I outwitted nature, or I worked with it and I’m still alive!” It is one of the beautiful realisations of bicycle travel, to feel how incredibly small we are, to feel the fragility of life and how lucky we are. To wake in a tent in Alaska or Canada is to wake and feel truly alive, equal to waking in the desert of Australia, the altitude of Tibet or in the hull of a yacht at sea.